What is Have Kiln Will Travel? 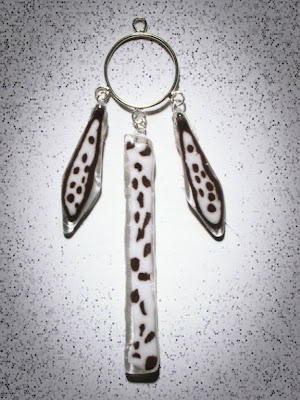 What is Have Kiln Will Travel?

Have Kiln Will Travel (HKWT) is a fully equipped traveling fused glass studio. Six small kilns are brought on site to teach glass fusing along with a large selection of art glass, and all of the necessary tools. It is the only traveling glass studio in the United States servicing art centers and community education programs.

HKWT is truly a unique opportunity and an ongoing experiment in community education. HKWT teaches the basics, gives you the opportunity to watch your creations come alive in the kiln, and for the jewelry classes you take your works of art home that day.

When Are Events/Classes - Use the calendar below for a complete listing of classes and their locations.

Detailed Class Information - Use the "Search Terms" section in the lower left column to find detailed blog posts regarding what is taught and what is made in the classes. There are also class specific descriptions found at the "Information Links" section in the left hand column of this blog.

Fund-Raising Events - In addition to classes the HKWT concept can be used to raise money for your favorite charitable or nonprofit organization. Use the "Information Links" section to obtain a document with detailed information on hosting a HKWT event.

Samples of some of the best projects this year

It has been a little over two years that I've been traveling the Twin Cities greater metro toting around my little kilns teaching glass fusing, but mostly having fun. It has been very encouraging and satisfying to receive so many heart felt thanks from and comments from students regarding their glass fusing experience. There have been many supportive community education staffers too. Now we look back and laugh at some of their first reactions to my class proposals... "You want to bring what?... kilns to our school... gee I don't know..?"

In many ways I've learned  more about myself, art, and teaching than my students may have learned about glass.And because of this there are no regrets that I took this two year hiatus from the IT world. The most important lesson learned was where creative activities fit into my life, and what kind of balance is necessary for me.

My wife and I are moving to her home state of Iowa in a few months, and my teaching adventures will end in June. I've been looking over some of the work created by my students over the years, and will outline some if it in this final post. 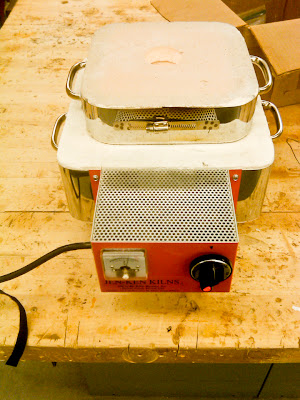 First off there is the star of the show my little Jen Ken Fuse Box. You can see the little glass view port on the top lid (with handles). Everyone would stand around to watch their glass become art. You do this only once though. It is like watching paint dry until the magic temperature of 1500 is reached, then the fun happens fairly quickly.I would bring up to seven of these to class and we would have multiple firings in a six hour period. Most students go home with more value in their in hands then they paid for the class, not to mention the fun they had. 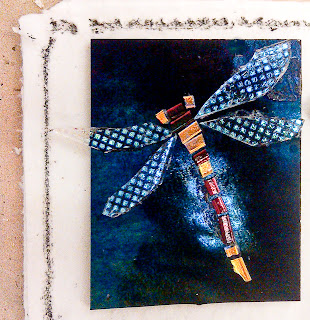 This little number wins the award for best design. I tack fused this so that all of the pieces melted just a bit. It was kiln fired just enough to round and soften all the edges while remaining a distinct relief on the surface. If I'm remembering correctly it took the student around an hour to design it. More typically students just have fun melting glass and almost randomly arranging glass bits. They choose colors, shapes, sizes, patterns, and textures from the vast array of glass I bring. Few however actually design objects like this. The dragonfly is sitting on ceramic fiber paper that lines the kiln shelf to prevent the glass from sticking to the shelf (the pinkish area on the left).

Here we have the infamous Italian Millefiori glass. Infamous, because it is the only non Bullseye glass I bring to class and it cannot be mixed with any other glass. Students are always trying to sneak a piece into their projects. Occasionally, I miss what they are doing and the project is fired and subsequently cracks and falls apart when cooled, because Murano and Bullseye glasses are technically different kinds of glass. In the case above the student made a bracelet just using millefiori which is one of many projects that can be completed during the class. 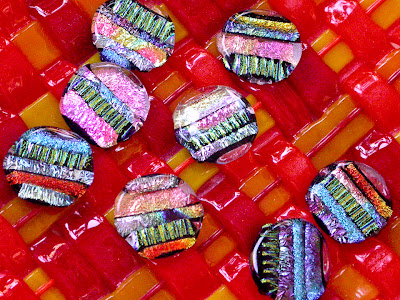 Here you see dichroic (aka glitzy) glass buttons on top of a glass weaving project. Glass weaving is part of a six week class. The buttons however can be made during a one day class. I bring a large section of  jewelry 'findings', that is, the hardware parts for objects which can be made during the class. Some of the findings are for: belt buckles, wine stoppers, money clips, tie clasps, pendants, earrings, and much more. 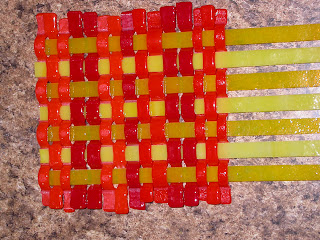 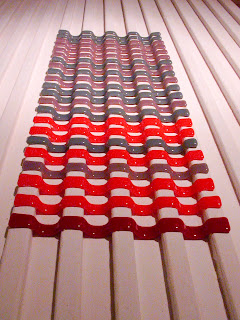 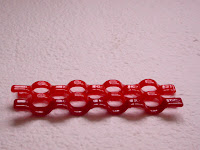 The above three pictures show several stages of making a weaving project. (Other examples are shown in earlier posts).The image to the left shows the mold which bends the glass rods in the kiln. The bottom image shows the rods after they are bent and lined up in opposing up/down patterns, creating the space for weaving. The image to the right shows the weaving process where the yellow rods are being woven through the bent red rods. 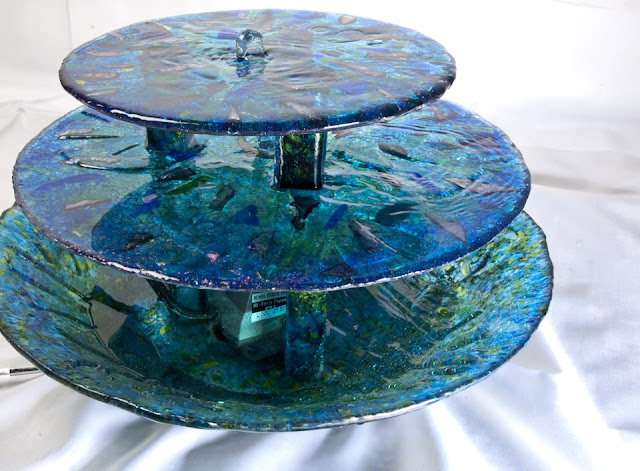 Another interesting project was this three tiered fountain. You can see the small pump on the bottom and the water gurgling through a center tube going through the two upper tiers. This was the largest and most costly project attempted. In my longer courses I allow students to make whatever they want after they get a feel for the basics. This can lead both teacher and student down paths with a lot of surprises. I typically can see from the start how a proposed project can be accomplished, but as always, the devil is in the details.

When you start working on larger projects glass shows its true nature as a medium not for those who need instant gratification. This project took many week past the six allocated to it at the Bloomington Art Center. The project was completed at my studio after many more weeks of testing, redesign, and practice firings. When a project is completed, it is often really only the prototype. Having been through the process so many technical and design improvements are realized which could make the next effort so much better.... but for me personally (at several hundred dollars each, and many more hours invested), a second effort is seldom attempted. I'm usually more inclined to be off doing new things and facing new challenges instead of repeating the past. 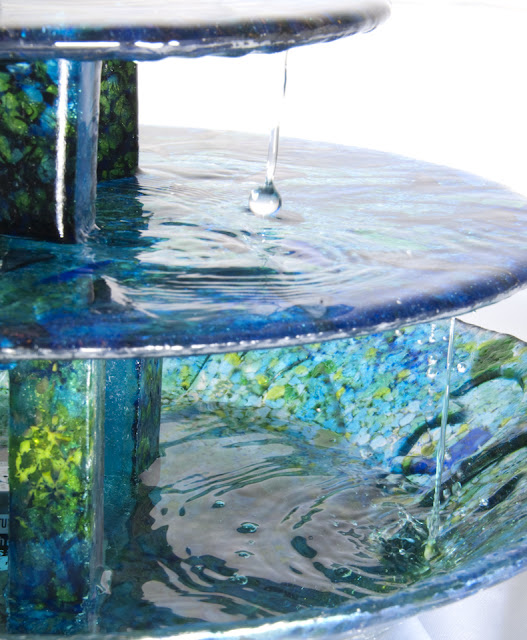 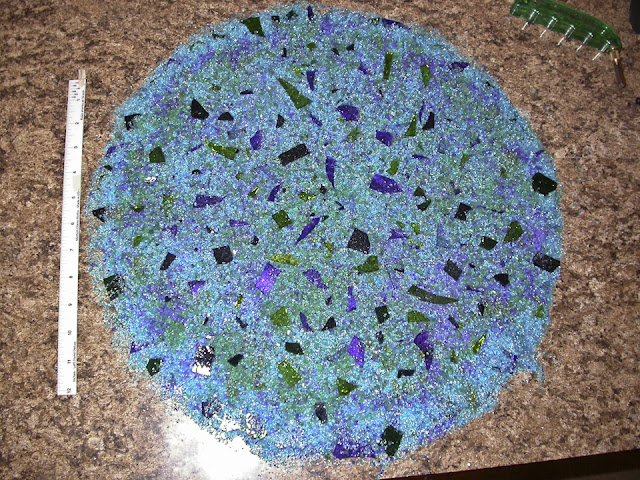 The image directly above shows the glass layout for the bottom bowl of the fountain. A 12 inch ruler is to the left for scale. About 1lb of glass frit (glass bits) was spread out on a bottom clear sheet of glass cut in a 17 inch diameter circle. Some larger glass pieces were added for variation. This was fired into a flat disk/plate, then put into a large bowl mold and fired a second time to slump it into the bowl shape which forms the bottom of the fountain. The two top tiers were done in the same manner (minus the slump firing) and holes cut into them for the water tube to go through. The tiers are held apart by short glass columns which are made by firing a lot of frit into an elongated square mold, then cut to the proper length on a glass saw. 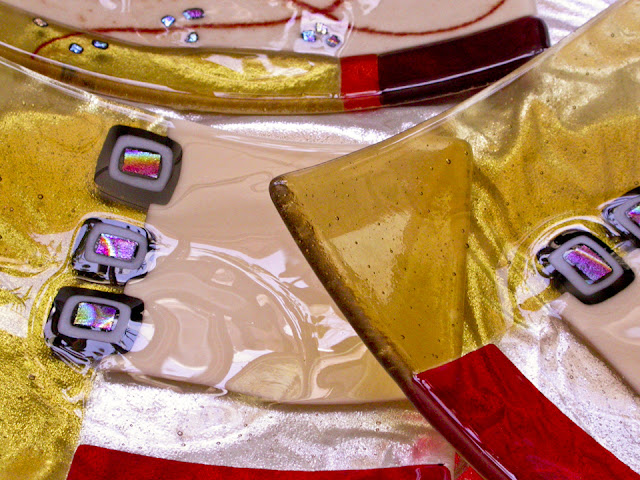 I'd like to close out this post with the image above which expresses for me the simple beauty of glass. It is a closeup shot of a collection of bowls done by a student as a practice for a final project. The reflective surface and taffy-like appearance is the epitome of eye candy. I often walk about during a class murmuring in refrain ... Glass is beautiful. It is impossible to make it look bad. Have fun. Play with it. Enjoy the colors and textures. There are no rules.
Posted by Jim Boles at 7:02 PM